“They’re not gonna want me to play ‘babies in space’,” says Greg O’Brien. “You know, where I pick ’em up in my hands and I swirl them around over my head like a rocket ship. I always say ‘Babies! In! Spaaaaace!’ ”

It’s October 2016, and he is musing about the latest O’Brien family news. His daughter, Colleen, is due to have a baby in November, and ever since he found out, Greg has been struggling with competing emotions.

“I’m not quite sure what to expect,” he says. “Am I excited? God, yes. And will it lift me up? Yes it will.” Eight years after he was diagnosed with early onset Alzheimer’s disease, O’Brien knows that becoming a grandfather could add new motivation and joy to his life.

But eight years of memory loss, depression, anger and mental decline have left 67-year-old O’Brien, who lives in Brewster, Mass., a different man than the outgoing writer and father who raised Colleen. He is easily confused, overwhelmed by groups and exhausted by conversation.

So even before his grandchild arrives, he knows there will be physical limits on how he can interact with the infant. “You know, they’re not gonna want me to put the baby on my shoulders. Hug the baby, pat the baby,” he says. “I get it. I’m not going to fight it.”

There are other problems, too, with meeting a new person when your mind is in decline. Greg’s identity is slipping and shifting under him. He never used to be angry or anxious. “You know, I’m an imperfect guy, but an OK guy,” he says, “and my grandchildren really aren’t going to get to know me. Someone else will have to tell them.” 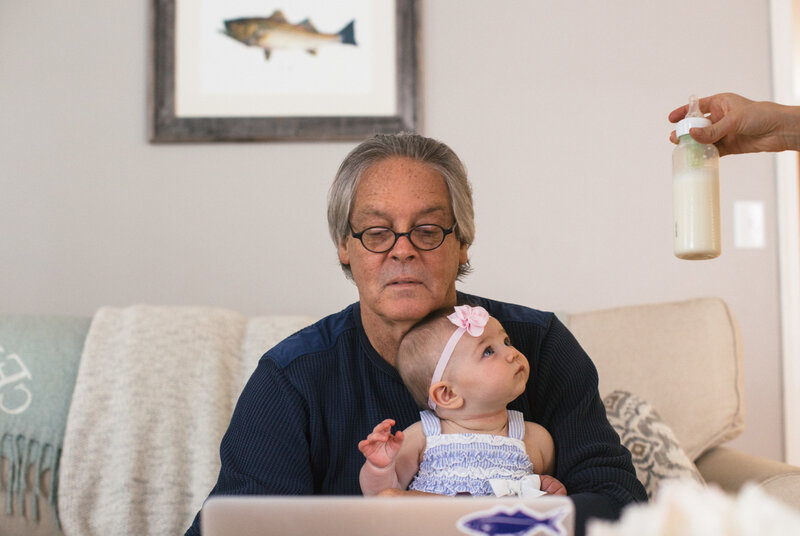 “I feel a little bit, when I think about grandkids, like a shell of myself,” Greg said before his granddaughter Adeline was born. “So it’s kind of bittersweet.”

“I feel a little bit, when I think about grandkids, like a shell of myself. So it’s kind of bittersweet.”

“Maybe through my writing, through other things, you leave a legacy behind,” he says. “I may try to connect in the heart and the soul. Just looking, smiling, touching and have my grandkids remember me that way.”

It’s Christmas. Adeline is 1 month old, and she spends most of her time sleeping. The house on Cape Cod is full of people, celebrating and talking. Colleen sees her father leave a crowded living room, seeking quiet and solitude. She finds him later sitting with his granddaughter, both of them content in their own worlds.

It’s January. In Massachusetts, the snow is 2 feet deep. The Christmas tree made it out of the living room and onto the back porch, only to be stranded in a snowdrift. 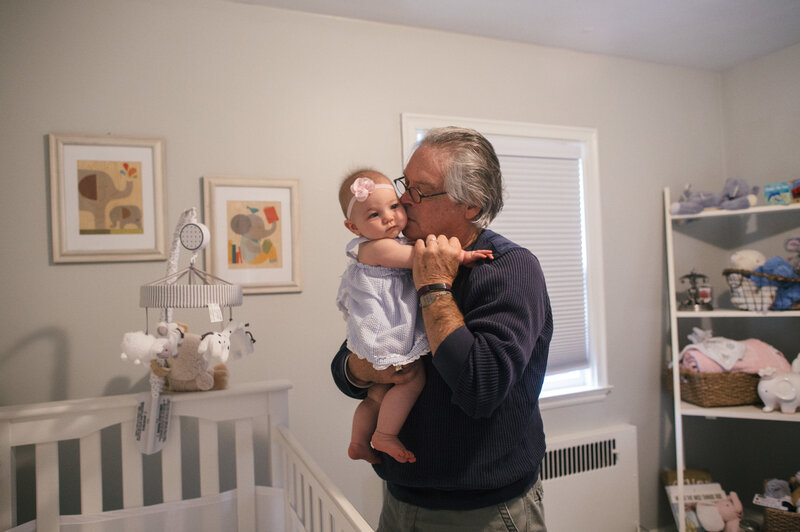 Greg worries that, with his mental state already in decline, his granddaughter won’t ever get to know the real him. So, he started writing to her in text messages, emails and essays.

When Greg sees it out of the corner of his eye, his mind transforms it into a billowy monster, crouching outside the door.

But it’s just a tree, and he pulls his mind back to reality and snaps a picture on his phone. Two-month-old Adeline would like this tree monster. He sends her a text, c/o her mother.

Too bad you couldn’t make it to the Cape on your tricycle last night. The Christmas tree on the deck turned into a snow monster and ate Conor and Mary Catherine. One gulp! I’m here alone and need you… Lots of snow, lots of sap…

“Sometimes I’m thinking straight, and sometimes not,” he says, but when something makes him laugh these days, he likes to send his granddaughter a text. “So she kind of gets a sense of me today,” he explains. In another text, he calls her his snow angel. In another, he updates her on a New England Patriots game. 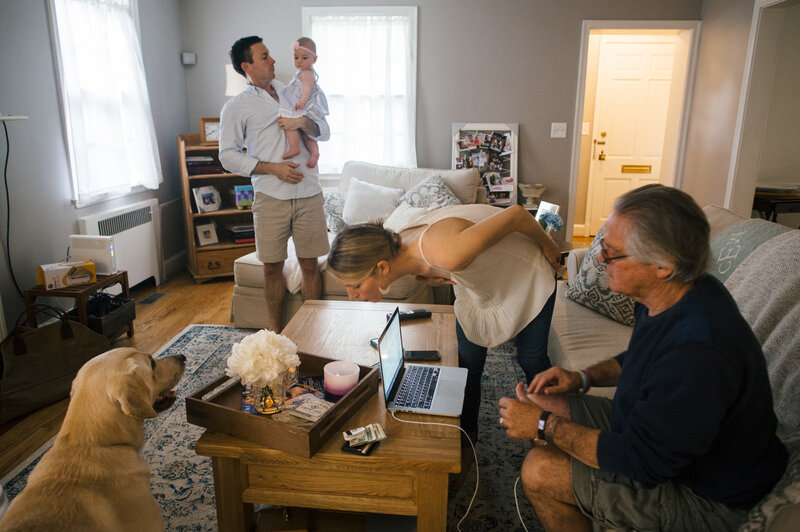 Greg sits with Colleen and Matt Everett and their daughter, Adeline. Greg has found his granddaughter brings new meaning to his life.

Now it’s April. Colleen has brought 6-month-old Adeline to visit her grandparents. An evening conversation about the cable bill quickly turns into an argument between Greg and his daughter. Colleen is alarmed by her father’s angry outbursts. Greg is frustrated by all the people in the house, talking into the evening, making him feel like he needs to be social. Both feel like the other person just doesn’t get it.

Sometimes, it feels to Greg like his granddaughter is the only person who gets it.

“She’s so innocent and so accepting of me that I enjoyed being with Adeline far more than anyone else,” Greg says. “It’s the innocence of a child.”

Now it’s May. At nearly 8 months old, Adeline is a joyful baby, screaming with delight, bouncing up and down and drooling onto her clenched fist.

She and her grandfather do not play babies in space. When they spend time together, there is almost always another adult around. 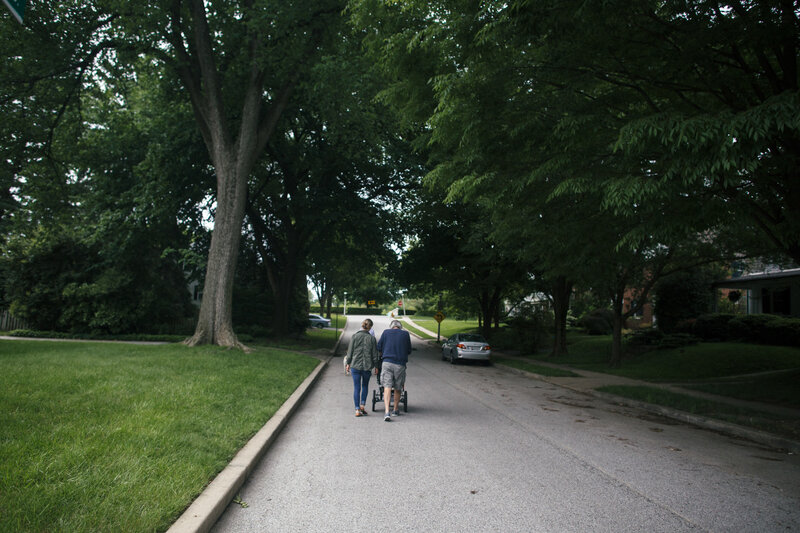 Greg and Colleen go for a walk with Adeline near Colleen’s home in Baltimore. Grandfather and granddaughter interact naturally, with “a lot of snuggling,” Colleen says.

And yet they interact so naturally. He holds her, makes faces at her and sings to her. “They do a lot of snuggling,” says Colleen. He does his legendary Donald Duck impression and Adeline giggles uncontrollably.

Since his granddaughter was born, Greg has written extensively about her, in text messages, emails and essays. A revised edition of his memoir being published this summer includes a chapter titled Sweet Adeline.

In it he writes of her birth. “New life. New hope. Something new to live for.”